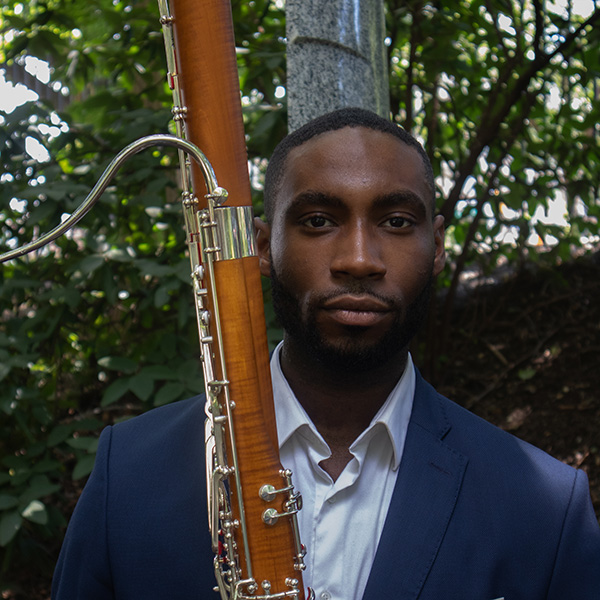 Baltimore native Mateen Milan is a performer, teacher and advocate of music that uses the bassoon as a tool for impactful, thoughtful and inspiring musical experiences. Mateen serves as an orchestral, chamber and solo musician throughout Maryland and beyond while serving as a teaching artist for institutions such as the Peabody Preparatory, Baltimore Symphony Orchkids Program and Yale Music in Schools Initiative. Mateen sees music education as a vital tool in developing youth and communities and seeks to create equitable learning environments for students to flourish in.

He currently serves as the Manager of The Baltimore Washington Pathways Program an initiative of The Peabody Preparatory’s Tuned In Initiative. Mateen helps nurture and guide 15 Fellows each year as they prepare for college and beyond.

Mateen’s diverse ensemble experiences have lead him to perform with the Hunt Valley Symphony, Occasional Symphony, Symphony Number One, Astronaut Symphony and other freelance ensembles such as the Johns Hopkins Orchestra, Northern Neck Symphony and the Baltimore Symphonic Band while pursuing his Bachelor’s degree at the Peabody Conservatory and Masters degree at the Yale School of Music.

Mateen has won awards such as the Peabody Institute Honors Ensemble Competition and Pressar Award and has had the pleasure of playing in diverse venues including places of worship, day care centers, and schools across the east coast including the various halls of Peabody Conservatory and the Yale School of Music. His orchestral career has led him to perform in prominent concert halls in Virginia, Washington D.C, New Haven, Philadelphia and Montreal. During his summers, Mateen has studied at institutions such as Domaine Forget, the Baltimore Symphony’s Academy Week and the Popkin Glickman Bassoon camp. He has also spent his time teaching for organizations such as the Baltimore Symphony’s Orchkids summer program, Yale Music In Schools Initiative, Ithaca College’s Summer Music Academy and the YOLA National Festival in addition to hosting summer programs at the Peabody Preparatory.

In his work as an administrator and advocate, Mateen has developed programs focused on equity in music education for institutions such as the Ithaca Summer Music Academy and has presented to the League of American Orchestras on creative youth development.