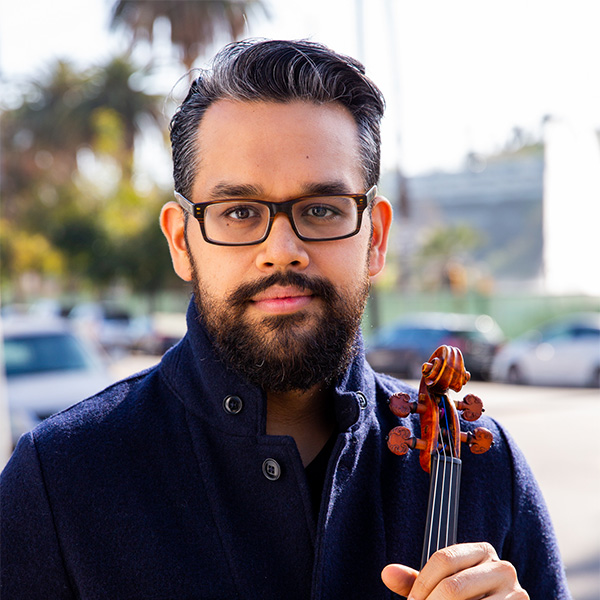 The work of the citizen and the artist is one, says VIJAY GUPTA: to make sadhana—a daily practice—of the world we envision. Hailed by The New Yorker as a “visionary violinist” and “one of the most radical thinkers in the unradical world of American classical music,” Gupta creates spaces of wholeness and belonging through his work. His album When the Violin was created during quarantine as a means of transforming our collective pain into a restorative, healing narrative. After a time of crisis, he shows us creative ways to revitalize our sense of hope and belonging.

“A master of music and medicine.”
— The TODAY Show

Gupta is the founder and Artistic Director of Street Symphony, a community of musicians creating spaces of connection for people in reentry from homelessness, addiction, and incarceration in Los Angeles. He is also a co-founder of the Skid Row Arts Alliance, a consortium dedicated to creating art for—and with—the largest homeless community in America. For his work in “bringing beauty, respite, and purpose to those all too often ignored by society,” Gupta was the recipient of a 2018 MacArthur Fellowship.

A riveting speaker, Gupta has shared his work with dozens of corporations, campuses, conferences, and communities across America over the past 10 years, including The Aspen Institute, Mayo Clinic, US Psychiatric Congress, American Planning Association, and the League of American Orchestras, to name a few. He recently delivered the 33rd annual Nancy Hanks Lecture on Arts and Public Policy—a lecture previously given by Yo-Yo Ma and Maya Angelou—where he was introduced by the Honorable Speaker Nancy Pelosi. To date, his TED Talk, “Music is Medicine, Music is Sanity,” has garnered millions of views.

Gupta has performed as an international recitalist, soloist, chamber musician, and orchestral musician for over 20 years, playing his solo debut with the Israel Philharmonic Orchestra under the baton of Zubin Mehta. He was a member of the first violin section of the Los Angeles Philharmonic for 12 years, and has collaborated with the Kronos Quartet, the Philharmonia Orchestra of London, and Yo-Yo Ma. Gupta also appears regularly with the Strings Festival in Steamboat Springs, Colorado. A dynamic recording artist, Gupta recently released Breathe, an album of the piano chamber music of Reena Esmail, under his own label. His solo album When the Violin, also recently released, featured the music of Esmail, J. S. Bach, and Esa-Pekka Salonen.

Gupta currently serves as the Senior Artistic and Programs Advisor for Young Musicians Foundation. He holds a Bachelor’s degree in Biology from Marist College, and a Master’s in Music from the Yale School of Music. His principal teachers have included Ani Kavafian and Glenn Dicterow. Gupta plays a 2010 violin made by Los Angeles-based luthier Eric Benning, and can be found on Instagram @guptaviolin.