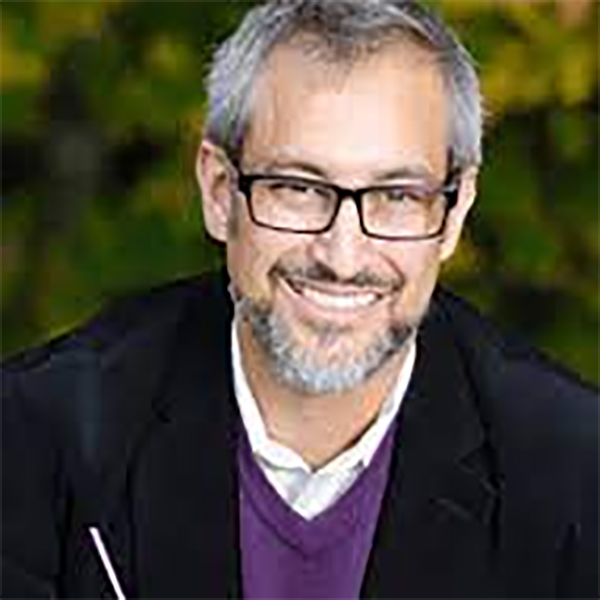 Matthew Melendez is the Founder and General Director of Great Bend Center for Music in Union, WA, an organization dedicated to exploring the research-based ways that people – especially people in rural communities – can use music to find common cause, nourish trust, and address community challenges. He grew up on the Jersey Shore saturated in musical flavors that ranged from his classical piano studies to Top 40 to the early salsa his grandmother would play while making tostones and alcapurrias. For Matthew, music wasn’t just a shared element of those diverse (and even contradictory) spaces, but a tool for navigating them. It provided not only joy and validation, but connections that were otherwise inaccessible to a quiet, queer brown kid in a predominantly white community.
In addition to undergraduate degrees in the arts of persuasion (Advertising Copywriting and Social Psychology), and nearly two decades of experience as a communications executive, he also has a master’s degree in vocal performance and pedagogy (where his thesis focused on the power of cultural tourism to revitalize rural communities) and *most* of a doctoral degree (ABD) in choral conducting. His research is centered on the sociological effects of participatory music making (and group singing in particular) and how the extra-musical benefits of making music can aid artistic objectives and serve as powerful community development tools. His particular interest is music’s ability to cultivate the bridging forms of social capital that are the very currency of all diversity, inclusion and equity work.
When the pandemic hit, Great Bend Center for Music had been preparing to launch a county-wide El Sistema program in collaboration with a new local YMCA. Instead, Matthew took the curriculum and adapted it for online delivery in the El Sistema model and started providing daily, no-cost early childhood classes online. The success of that initial program went beyond meeting the pandemic-induced demand for accessible arts and educational programming for kids in rural areas. Today it is serving families across the country as partner El Sistema organizations have begun to take advantage of the program’s compelling curriculum, accessibility, and expertise in the early childhood space.
He has served as the Executive Director of the Bremerton Symphony, Executive Director of Choral Arts NW in Seattle, and was the Founder and Executive Director of Anna’s Bay Center for Music in Union, WA, where he supplemented the musical education for hundreds of local youth, building self-esteem in a rural community where programming for the arts was virtually non-existent. He lives with his husband (bass) and son (still a soprano, barely) on the beautiful south shore of Hood Canal.

I first met Matthew while working as the Operations Manager while he was the Executive Director at the Bremerton Symphony. He immediately brought passion and energy to the organization, resulting in increased fundraising specifically for the expanding youth programming. When he shared his vision for Great Bend Center for Music, and the impact it could have on the rural community it is based in, years later, I knew he was the right person to lead the organization and that I wanted to join him. Matthew’s work and passion has been to tirelessly promote how music can build social connections and be used as a community development tool. He has seen firsthand how chorus members on opposite sides of the political spectrum find common ground as they learned music and laughed together.
One of Matthew’s most striking talents is his ability to impart the power of music and nurture individual talents with everyone who works with him. This is visible in not just his interactions with his unauditioned choir, but with his staff, broader community and financial stakeholders. He would be a valued member of the El Sistema USA board.

I met Matthew over a decade ago when I showed up to look into the choir he was leading. All it took was a couple of minutes, the first time we met, to know that not only did this man know what he was talking about, but that I was in a safe space. A safe space to learn and a safe space to be as a person. He is incredibly passionate and knowledgeable. He is always seeking to learn and become better. He lifts others up. Being around him, you can’t help but be inspired to be the same way.
I gladly drive 45 minutes each way to attend all rehearsals.
I have watched his passion for music, but also for individuals and community, create amazing things. From the simple friendships that never would have happened otherwise, to singing at Carnegie Hall. Great Bend Center for Music is creating beautiful, meaningful changes in our community, and I’m so incredibly blessed to be a part of it.