In 2018, El Sistema USA and The Canales Project (TCP) began a partnership centered around “Hear Our Song”, a piece of music with a powerful message. A year later, we sat down with Carla Canales to learn more about TCP, the “Hear Her Song” initiative, and her hopes for the El Sistema USA partnership.

Member Note: Are you interested in receiving the parts and scores for the El Sistema USA arrangement of “Hear Our Song”? Email Josh deVries at josh@elsistemausa.org to request the music.

About The Canales Project:

Vision: Through partnerships with organizations and individual artists, TCP aims to enhance messages and concepts relevant to social and cultural change.

Mission: To give voice to issues of identity and culture through music and conversation 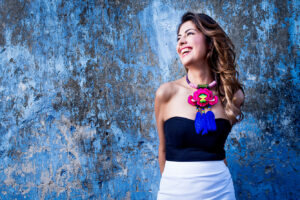 Carla Dirlikov Canales is an internationally known opera singer who is emerging as a leader in the area of using the arts to advance important social issues.  She has been a member of the President’s Committee on the Arts and Humanities Turnaround Arts Program, was selected by Foreign Policy Magazine as one of its 100 Leading Global Thinkers of 2015 and won the Medal of Excellence from the Sphinx Organization, which was presented to her at the Supreme Court by Justice Sotomayor.  In each case, she was the first opera singer ever to receive the honor.  As a singer she has received worldwide acclaim, and is best known for her portrayals of Bizet’s “Carmen” which she has performed close to 100 times in over a dozen countries.  She has performed as a soloist at Lincoln Center, the Kennedy Center, Carnegie Hall and top international venues in Europe, Asia and Latin America.  She is the founder and CEO of The Canales Project, aimed at giving voice to issues of identity and culture through music and conversation.

Our Interview with Carla Canales:

Tell us about yourself and The Canales Project

My name is Carla Canales, and I’m a professional singer, advocate and entrepreneur.  As the daughter of a Bulgarian father and a Mexican mother, I have always felt a sense of cultural confusion when it comes to identity.  Perhaps that’s why I gravitated towards music-I always felt that music is a place where nationality, gender identity, labels of all sorts don’t really matter.  Rather, it is a place where my imagination can run wild and I can explore emotions and what it means to be human.  I have always loved singing as it combines my passion for music and language.  As an opera singer I’ve had the chance to travel extensively, and performed many works by Verdi as well as the title role in Carmen (over 80 times!).  But I still had the sense that I was grappling with these questions of my own identity.  I realized that I’m not alone in this.  And this is why I started The Canales Project-as a safe space where we can explore issues of identity and culture through music and conversation.  To date we have led a number of initiatives in partnership with over 25 organizations, and professionally employed about 75 artists.  It’s been a dream come true!

How did you first hear about El Sistema USA?

While studying at the Academy of Vocal Arts in Philadelphia, I had the chance to meet Stanford Thompson and learn about his work with Play On, Phily!.  Stan has been an inspiration and a dear friend to me, and I am so in awe of what he has done.  He’s on the Advisory Committee of TCP and continues to be a big support.  I also learned about El Sistema USA from Tony Woodcock, which whom I co-developed and co-chaired a week-long workshop at Berklee College of Music, titled “Music as a Catalist for Social Change”.  Learning about the El Sistema model has been a huge inspiration to me as I try to navigate ways to use my voice to create positive social change.

What excites you most about the HHS Initiative?

I’ve always wanted to find ways to use my voice both literally and figuratively to advocate for the things that I believe in.  Through this project, we are all able to do so!  It’s been so special to get to know the 40 women we have honored to date and to better understand the challenges that they overcame to be the leaders that they are today.  It’s been equally impressive to witness the process of our female composers as they go about the daunting task of writing a song that tells the story of these female leaders and honors them through music.  Finally, in doing this work, I feel we have created a small community of women who are celebrating and supporting women, and that’s been very special to witness.  As we grow this project, I would say that the thing that excites me the most is to develop our educational program with El Sistema USA in a way that incorporates youth into our support system, as we all believe in them as our future, and want to support them!

What are your hopes for the “Hear Our Song” El Sistema USA Partnership?

I truly hope that the participants see this as an opportunity to celebrate and thank remarkable women from around the world, and especially those whom are making a difference in their lives every day.  “Hear Our Song” has been like an anthem of joy; maybe in a small way an “Ode to Women” in the way that Beethoven wrote and “Ode to Friendship”.  There are too few moments when we stop and thank women who do so much to help us, and in this way perhaps each participant can think of a woman each time they practice the song, and use that moment to show their appreciation.  I also hope that this project might inspire youth to learn more about the work that female leaders are doing around the world.  We’ve had the privilege of honoring such incredible women like Malala, Michelle Obama, Justice Sotomayor, and many others who are not necessarily household names.  I know that for me, learning about the work that they are dong everyday is a huge source of inspiration!